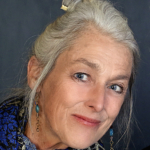 Originally from Australia, Kate holds degrees in Education, Counseling, and an MFA in Directing. Kate is a freelance theatre professional who has worked professionally in all aspects of theatre for over 40 years – including acting, directing, producing, writing, management and arts in healthcare. She taught in the theatre department of a liberal arts college for 18 years, founded an arts in healthcare company focusing on storytelling and performance, and was Artistic Associate at a professional theatre company in Oregon where she also developed a successful outreach program.

Currently Kate is co-founder/Producing Artistic Director of Red Earth Theatre (2013) in Sedona, Arizona which produces a wide range of theatrical endeavors including an annual storytelling/performance project with the Mental Health Coalition Verde Valley.  She also facilitates arts workshops for veterans at the VA. Kate developed Performing Wellness ™  and is the author of Personal Magic- Conscious Empowerment Through Creativity & Spirit and offers workshops drawing on those tailored for individuals or groups.

Kate has worked in all aspects of theatre from management to teaching, producing, directing, acting and writing. Playwriting credits include  Sky….Diamonds, a full length play about a family living with Alzheimer’s, nominated for a 2014 Flagstaff Arts Council Viola Award.  Loplop and the Queen, was written for the week-long celebration of surrealist artists Max Ernst and Dorothea Tanning and played at the Sedona Heritage Museum and in May ’21 Ungodly Behavior with a public reading at Tlaquepaque, Sedona.

She has also written numerous 10-minute plays as well as plays for young audiences, of which many have been produced. She coaches playwrights and helps others create original work.

As a director, her work includes professional productions of  Secret Bridesmaid’s Business,  Quilters; The Weir, the American Premier of  Sweet Phoebe  and the world premier of  Fred & Mary:  An Unconventional Romance  at the Prescott Elks Opera House in 2012. College productions include  Mother Courage,  Antigone,  Reckless, Voice of The Prairie,  and  Keely and Du. She has directed many productions for Red Earth Theatre including  The Wild Party;  the original script  of Recycling with a Unicorn for a site-specific production at Sedona Recycles,; Round & Round the Garden;  Loplop and the Queen; Interiors;Traveling Through Shakespeare,  an original production she created to honor the 400th  Anniversary of Shakespeare’s death; Morley, a new play that Red Earth Theatre shepherded through a 5 month workshop process to its first public production; Darkside; Midsummer Nights Dream an out-door production and many on line productions during 2020. She was about to open a stage adaption of short  Pink Nectar Cafe when the pandemic forced a cancelation. It will open Fall of ’21.

Balancing all this creative endeavor is her passion for the outdoors. She provides opportunity for individuals to find balance and healing through facilitated interaction with her horses.  Also a trail runner, the bounty of the red rocks of Sedona keep her grounded enough to manage the unpredictability of nonprofit live theatre and the vicissitudes of life lived on the edge.