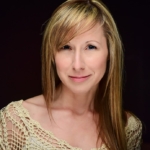 Listen to her commercial demo HERE

Listen to her narration demo HERE

Vicki Liston’s fascination with creating, capturing, and enhancing voice recordings has followed her throughout her life.  It started with the big boxy tape recorder she got for her fifth birthday and years later, she still gets a thrill when hitting the red ‘record’ button.

As a working VO, she’s voiced for national level companies, such as Motorola, Pizza Hut, Chevron, Delta Dental, Hardee’s/Carl’s Jr, the LPGA Golf Association, and Wired Magazine as well as regional and small businesses, start-ups, and non-profits.  She’s represented by four highly respected talent agencies and strives to exceed her clients’ expectations with each booking.  ‘Let your voice lead and the rest will follow’ is her creative philosophy with every new project.

Vicki founded Smart Mouth Voice Overs, LLC, named as a tongue-and-cheek reference to her Mensa membership and the spectrum of ‘intelligent to sassy’ vocal qualities she creates.  The company is a certified Woman Owned Small Business (WOSB), an approved government contract provider, and delivers audio recording and production for commercials, e-learning applications, corporate narration, telephony applications, new media narration, training videos, app narration, and much more.  It offers the same broadcast level recording studio, state-of-the-art equipment, and remote recording capabilities she uses for agents and casting directors and it also produces ‘On The Fly…DIY’, an award-winning series of easy-to-follow, unique project tutorials for the casual DIYer.  With over a million views on YouTube and also airing on Amazon Prime, ‘On The Fly…DIY’ serves as the philanthropic arm of the company as all proceeds earned from the show are donated to no-kill animal shelters and rescue organizations.  The series has created a positive buzz and resulted in multiple highlights as a featured expert on such prominent websites as MSN, Realtor.com, Apartment Therapy, Family Handyman Magazine, SimpleMost, Best Life Online, DontWasteYourMoney.com, Hometalk, Home BNC, and more.

Educated at the UMKC Conservatory of Music, she immersed herself in vocal studies, piano lessons, running a mixing board longer than she was tall – all of which culminated in a BA in Music with a concentration in audio engineering.  Her Master’s degree in Management – albeit a bit more practical (ie. less exciting) – would still serve useful.  In 2012, she just couldn’t avoid the alluring pull to voice over any longer and traveled to New York City to study with Susan Berkley, the voice of Citibank and AT&T, and Moneen Daley of Mo’Vibe Voice Overs.  She found herself recording in the exact studio space that Sir Paul McCartney had used just two years prior…and all while Lady Gaga was laying down tracks just one floor below at the same time.  Good omens, right?  Since then, Vicki’s continued actively training and coaching with Clio award and three-time ‘Best Voices of the Year’ winner, Marc Cashman.

While voice over is her first love and primary focus, Vicki is continuously creating content by writing scripts, article contributions, and tutorials and performing on-camera as a host, principle role, and support cast.  She’s appeared on-screen for Anheuser-Busch, Food Network’s Restaurant: Impossible, William H. Macy’s ‘The Layover’, the award-winning ‘The Ghost Who Walks’ currently on Netflix, and a plethora of commercials.  She also has a reoccurring role as a host on Hometalk TV, which highlights many of ‘On The Fly…DIY’s projects but in a more ‘live’ format.  She’s performed on stage at Carnegie Hall twice and is classically trained as an opera singer, but has been known to dip her toes in opera parody (once reworking a Puccini aria into a comedic piece about the Great Toilet Paper Rush of 2020).  She also taught voice over classes for a St. Louis college and is deliriously proud of her former students who still contact her and report their VO successes.