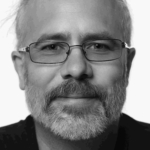 P James Norris has an MA in Philosophy from the University of Kansas and an MS in Physics from Kansas State University. In 2018 he started getting short stories published by the likes of Moon Magazine, Fantasia Divinity, and Rhetoric Askew. His “Izzy Tells No Lies”, originally published in Fantasia Divinity’s Feb 2018 issue, has been republished in B Cubed Press’ Alternative Theologies anthology, and his “Angel of Death”, originally published in Moon Magazine’s online ezine, has been republished in their first anthology, Out of this World. “Angel of Death” and “Izzie Tells No Lies” were Quarterfinalists in the ScreenCraft Short Story Contest in 2017 and 2018, respectively.

Back in the day, he wrote four spec scripts for Star Trek: The Next Generation, and while none of them were produced, the first one, “Yellow Alert” made it into the top 10 of approximately 110 scripts left for the third season producer by the second season producer when the second season producer decided not to return for the third season–none of the 110 were produced. But in consideration of the strength “Yellow Alert”, he was allowed to submit the subsequent 3 scripts without using an agent. He’s also written an original TV pilot entitled Project Ωmega – Nina Blacke, which has placed or won in several contests, a pilot for Supernatural, Supernatural: Lucky and Gabbie, which has placed recently in several contests, and an original fantasy/crime show pilot entitled Powers & Glory.

He has five novels in various states of incompletion–maybe, someday, he will finish writing them.

He seldom writes poetry, but when he does, it’s always haiku; something about the brevity and structure of haiku appeals to him—don’t ask him why, because he doesn’t know.

He lives in Idaho with his wife and a dog and two cats, where he is pursuing his PhD in Physics.