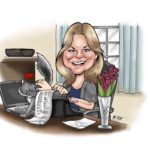 Thank you for viewing my writer’s profile on InfoList.  I have been using InfoList for over ten years and have connected with many creative people through it.  It has been a great way to send out my scripts as well as work with producers and directors on their existing projects when needed.  Maybe we will connect next!

You can view my full background on my website, YourWritingMuse.com, but in short as a writer I have had:

• 16 plays produced (all for teens, children, and family-based audiences)
• 4 screenplays optioned (3 were romantic comedies, 1 was a “who-done-it” drama/thriller)
• 1 TV show optioned (a news/doc. half hour show)
• Animal Motions, a children’s picture book and app, published (book published by Indigo River Publishing, app published by Authorly)
• Sergeant Stubby in the Great War, a historical book app for 4th grade and up, published (by Zoozil Publishing)
• Have ghostwritten, edited, done research for, and helped market over 12 books with authors from Los Angeles to New York City (for both fiction and non-fiction)
• Worked in Los Angeles as a writer-for-hire for many independent producers and at studios (including Martin Sheen’s ESP Productions  at Warner Brothers Studios)
• Was hired to write an animated feature film treatment (which included a lot of in-depth research)
• Have had articles published in Script  magazine, InkTip.com’s  newsletter, and Scriptapalooza’s  newsletter
• Have been a judge in 2 screenwriting contests: CineStory’s Screenwriting Competition  in
Chicago (for 2 years) and The Kingman Films International Screenwriting Competition  in L.A. (for 1 year)
• Have been hired as a ghostwriter, script coach, editor, and researcher in all mediums

• I was the Artistic Director for The Sheil Park Players Theater  in Chicago for 5 years (I produced and directed 22 original shows, all from writing workshops I ran which helped launch several playwrights’ plays that went on to N.Y.C. and London theaters).

• I am the Co-writer and Lyricist for the soft rock song Can’t Get Over You  (can hear the full ballad on my website).

I have scripts for both film and TV series available (samples of them to read are on my website).    I write in most all genres except science-fiction.  And as stated above, I am also available for hire to revise existing scripts.  (I truly enjoy the collaboration of working with others on their dream projects too!)  I look forward to hearing from you to see if we are the right fit to work together on either one of your projects or to see if you’d like to read one of mine.

Thank you for your time and consideration.