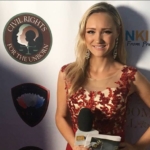 Christi Given has always loved music, performing, talent shows and being in front of the camera since she was a little girl. Given has had years of television experience as a stand in and featured extra and finally found her place in television primarily while interning with the Trinity Broadcasting Network (2010). Given practiced on the teleprompter, did fill in assignments, and even got the opportunity shared her story and music on the youth network affiliated to TBN called, the JUCE TV Network. Given was officially hired as one of the JUCE TV Network hosts in 2014, and hosts “XVZ (the Xtreme Video Zone), which is the top ten countdown of the top Christian music videos currently on the charts.

The most significant moment with the TBN Network was appearing on the “Praise the Lord,” show as a guest with TBN founder Paul Crouch, son Matt Crouch, and Laurie Crouch. (September 6, 2013) Christi shared her passion for youth, media, the importance of the youth network JUCE TV, and the impact it has had on her life personally. Given recently was on the show again on March 3, 2016 as a host for the launch of the new JUCE TV Network studio with Matt & Laurie Crouch, Bobby Shuller (Hour of Power), Jentzen Franklin, David Diga Hernandez, and Christian artist Lincoln Brewster.

Given also launched her release of her single ‘The Other Side,’ (May 2015) with her performance of her new single, “The Other Side (Amazing Grace),” (Grammy producer/engineer Nathan Dantzler wrote the song with Given & Joshua Silverberg). The song aired live on the JUCE TV Network telethon and Christi led the live in studio audience in worship and praise. The song was written and recorded at the Hit Lab in Los Angeles (now located in Nashville, TN). Dantzler worked on the popular Hillsong United, “Oceans (Where Feet May Fail)” radio edit, which reached the top of the Billboard charts. Songwriter Joshua Silverberg works as a Capitol Records producer and writer.

Given also has released her first official music video on Youtube October 1, 2016 by director Josh Enobakhare. The music video was officially aired on the JUCE TV Network on the show, “Hot Off the Press,” and on iTbn.org officially October 2, 2016.

Given’s song “The Other Side” debuted on KKLA Christian radio on “Reaching Out Radio” on 99.5 FM KKLA in Los Angeles, California. Given became a part-time host in July 2016 after her initial show and interview launched helping “Build God’s Kingdom in Hollywood” on Saturday’s weekly.

Christi Given re-released her first official single “The Other Side” as a Remix in January of 2017. She has continued her online hosting (2010) with JUCE TV Network launching a new online series called, “The Power Source” on the Youtube for the TBN youth network; which features evangelists, Christian artists, speakers and influencers. (2017)