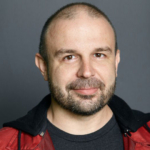 Tomasz Mieczkowski is the founder of IADB – Websites for creatives. Tomasz acquired the taste for web development in the late 90’s while serving in the United States Navy, where he programmed his first basic website. After an honorable discharge from the military he continued his passion of converting vision an ideas into its virtual existence.

With a Master’s Degree in computer science from Brooklyn College, Tomasz has developed well over 100 real estate websites in New York City and in doing so, he has gained an in-depth knowledge of front-end web development, interface design and user-experience methodologies.

Although while living in New York City Tomasz attended many acting and improv classes, it wasn’t until he moved to LA in 2013 that he realized that there was a virtual void that needed to be filled. First, starting with actorhunter.com, Tomasz attempted to amass the important knowledge and materials needed to break into the industry, but soon he realized that information is just not enough.

IADB.com went up in early 2014 and Tomasz continued creating better looking website templates that cater specifically to actors while developing tools and gadgets that make mundane tasks easier. By 2015 IADB was already helping over 100 actors with their online needs.

As the number in the IADB family was growing, Tomasz kept on working on making the websites faster, better looking and easier to build. In 2015 he came up with an algorithm that scans existing data on other websites and social media profiles and import that data for actors to build the website much faster. Soon after, the idea of “Instant Websites” was born and suddenly hundreds of actors around the world wanted to give it a try.

What I do over at IADB is building websites for actors, but there's definitely more to it. Feel free to reach out to me if you have any questions.