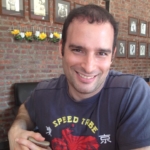 Scott has been film and video editing for nearly twenty years splitting his work experience between New York and Los Angeles.

Scott has worked closely with high profile clients, ad agencies, and Hollywood directors who trusted their projects in his creative hands.

Over the years, his resume boasts a wide variety of TV networks including SHOWTIME, FOX, A&E, TLC, NATIONAL GEOGRAPHIC and THE DISCOVERY CHANNEL. In commercials Scott has edited multi-ad campaigns for LEXUS, TARGET, HONDA, and FORD.

From 2014 through 2017, Scott worked as editor and creative consultant to J.P. MORGAN CHASE on their Brand Marketing team developing, filming and editing commercial and philanthropic videos to elevate their brand throughout the world.

A handful of projects Scott participated in have been award winners including the music video for SHAKIRA “TANGO” as MTV’s 2001 VIDEO OF THE YEAR and JASON DERULO “IN MY HEAD” as MTV’s 2010 BEST MALE VIDEO.

An avid (no pun intended) follower of all creative endeavors in film, Scott also directs, writes and produces. He has written several screenplays and self-distributed one of his own films, CROSSINGS, for purchase on Amazon.

He currently resides in the town of Port Washington, NY on Long Island with his wife and two sons.