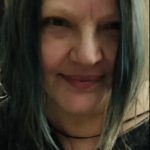 Michelle Espinosa is a Los Angeles native whose distinctive writing and filmmaking voice she attributes to her American West and Mexican heritage.  As a Directing Fellow of The American Film Institute, she was the Mary Pickford and Remy Martin Foundations Grants recipient. She was also interviewed in American Film magazine and by the New York Times who described her award-winning short film, Pinfeathers, as having a “Salammbô-like decadence …” ​ Pinfeathers is the recipient of a Silver Plaque at the Chicago International Film Festival.

Her first film, Silence, was showcased several times by The Director’s Guild of America Theater in Los Angeles and presented by L.A. Film Forum. She is the writer of When Rent is Due, a play (that premiered at New City Theater in Seattle). She authored All the Leaving, a novel that has been translated into Spanish and published in Mexico. It took ten years to write her novel because, as she went, she taught herself to write, then how to write literary fiction, despite almost no reading comprehension.

Michelle is currently working on her documentary film about Neurodiversity.