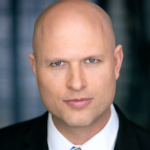 Matt is the founder and CEO of SHERWOOD PLAYERS PRODUCTIONS, a Los Angeles based production company specializing in multi-platform services for content creators and filmmakers, with a strong community outreach. Sherwood Players is focused on creating original content with purpose that is entertaining, thought-provoking and rooted in the discipline of theatre. The company runs monthly production workshops, called SPECTRUM, which has featured prominent entertainment industry guests including Louis Lombardi (The Sopranos) and Mark Henry Johnson (creator and producer of HBO’s The Deuce.)

Matt also teaches an 8-week Sherwood Director’s Course and showcase for first time and experienced directors and actors; the course focuses on developing the director’s vision while nurturing the relationship between the director, actor and script. The Director’s Course has developed and produced several award-winning short films.  He is also the director and personal acting coach for world renowned keynote speaker Ryan Foland, who was recently named Top Personal Branding Expert by Entrepreneur Magazine, and is a 4-time TEDx speaker.

Matt produced and co-directed the multi-award winning documentary Tupamaro: Urban Guerrillas (2019), an up-close look at vigilante street gangs in Caracas, Venezuela, winner of BEST FILM as well as BEST DOCUMENTARY at the Beverly Hills Film Festival.  Tupamaro was recently acquired by SIDEWAYS FILMS and licensed to ARTE Network which is streaming the film in several countries including France, Germany, Romania and can be seen on Nat Geo Mundo in the US.

He produced and directed the 2020 Audie Award nominated audiobook The Barefoot Spirit, based on the New York Times Best Seller about the making of America’s #1 wine brand. The unique “audio-theatre” book includes a full sound-design and musical score and features Ed Asner in a cast of over 20 actors, including Matt’s own performance as “Michael Houlihan”, the co-founder of Barefoot Wine. The Barefoot Spirit has garnered several positive reviews in publications including Forbes and Audiofile Magazine.

As an actor Matt has appeared in over 70 films, TV shows and music videos, including  Netflix’s Bright (2017), Games People Play (2019) on BET and Justin Bieber’s Let Me Love You (2016).  He won BEST SUPPORTING ACTOR at the Lucky Strike Film Festival for his performance in the award-winning cult favorite Garden Party Massacre (2018).