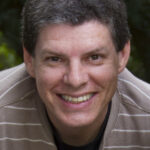 Emmett Loverde is a native of Chicago, Illinois. He grew up in Berkeley, California and received a degree in Theater from UCLA. He has written extensively for stage, screen, television, and radio. Over 250 separate productions of his stage plays have been mounted worldwide to date. He has also written and directed three feature films and numerous shorts.

Films written and directed by Mr. Loverde include the features “Girls’ Night In (Beauty, Brains, and Personality);” “She’s Out of His Mind;” and “Santa’s Letters;” and the shorts “Good Business Sense,” “Jesus Awakens the Little Girl,” “A Timely Maneuver,” “Snacking,” “The Truth About Me,” “Cranky Call;” and “Free Advice.”

Co-written with Larry Maraviglia: “Together Again,” “Ficus Rex,” “Love at Second Bite,” “C.C. Julian,” “Without a Name,” and “Final Curtain.”

Pilots: “Berkeley Girl,” “Beauty, Brains, and Personality,” and “Free Advice.” Other feature scripts: “CODEC;” “Mergers and Acquisitions;” “Real Power,” “Feathers May Fly,” “Garth of the Wild,” and “Desire Sleeps.” Also Mr. Loverde’s spec episode for TV’s “What We Do In The Shadows” called “Open” was a second-round finalist in the 2020 Austin Film Festival.

His stage plays include “A Timely Maneuver;” “Beauty, Brains, and Personality;” “Good Business Sense;” “Jesus Awakens the Little Girl;” “The Maginot Line;” “Play How You Play;” “Love Fax;” “Sensitivity, USA;” “Till You Get To Baraboo;” “Santa’s Letters;” “So Much Snow;” and “Uneasy Overture.”

Mr. Loverde’s plays are published by Playscripts, Inc. and Heuer Publishing. His picture book “Clawdette the Cat” is published by Adamo Press.