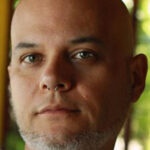 I was born in 1968 in Spain. I started with video and TV in 1994, developing video projects of all kinds (from music video clips to advertising spots) until 2000. In 2015, I founded TransReal360, a production company of VR/XR immersive projects, closing it in 2019.

1994/96: Organization of I, II and III ‘Badtaste’ Cycles of Horror Movies for the International Film Festival of Gijón

2016:  360o video for the #NiPasoNiMePaso campaign (300k signatures) on change.org against school bullying

2017:  Winner of the hackathon by Fundación Telefónica ‘Openfuture_ VR Challenge’