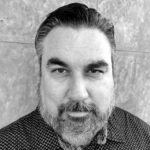 Brian Fitzpatrick is a produced screenwriter and award-winning author.

Imagine being just 7 years old and accidentally watching the horror classic, Night of the Living Dead.  For writer, Brian Fitzpatrick, that’s precisely what happened.  Terrified but riveted at the same time, watching the zombie horror became the catalyst for a life-altering path forward.

After a week of sleepless nights, he became fascinated with the idea that he could be so scared, yet be perfectly safe.  After mom suggested he write stories of his own, Fitzpatrick put pen to paper and has been creating horror and science fiction tales ever since.

Fitzpatrick is the author of the bestselling nanotech science fiction novel series, Mechcraft.

He is the co-writer and script supervisor of the upcoming science fiction thriller film, The Simian Trials.