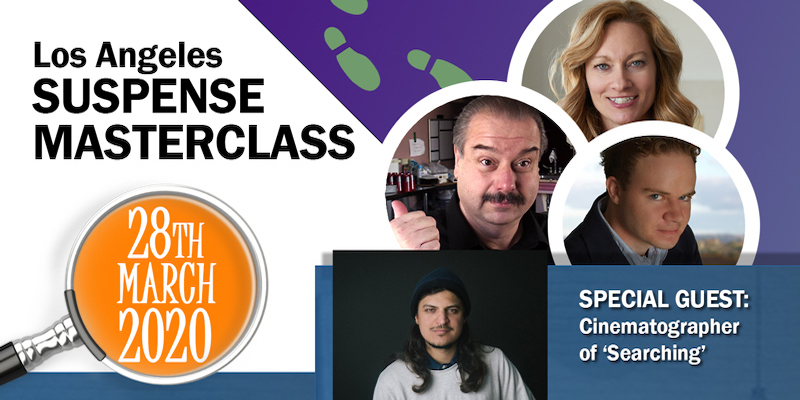 Suspense Masterclass – for Directors, Screenwriters, Editors, Composers, and Content Creators of All Types

Here’s info on a great SUSPENSE MASTERCLASS where you can learn the secrets of creating suspense on the screen, and acquiring the tools to keep your audience riveted and engaged – so you can create the next binge-worthy show or hit feature film!

TIP:  These tools not only apply to thrillers and crime dramas – but ALL types of content, including comedies!

Details are below – as always, there’s a great discount for INFOLIST.com – and feel free to forward if you know someone who might be interested!

Explore the secrets of building suspense on the screen
& Learn tools for keeping your audience riveted and engaged!

Hitchcock buff and screenwriter who has written

helping TV writers get the details right on shows like

Producer of the “Hitch20” docu-series and author of “Suspense With a Camera,” sharing secrets he’s learned from decades of research into the Master of Suspense, Alfred Hitchcock.

Date has been moved to:

What is suspense, really?

According to Jeffrey Michael Bays (aka the Hitchcock Whisperer), suspense isn’t a genre, it’s a storytelling tactic.  Even a romantic comedy like “You’ve Got Mail” contains suspense.

“Suspense is that thing that keeps your audience so enthralled by your story that they forget about Facebook and desperately follow every turn of your plot.” –Jeffrey Michael Bays

Jeffrey has traveled the world teaching suspense and is now teaming up with writer William C. Martell and forensic scientist Jennifer Dornbush to bring a full day of suspense training to Los Angeles. If you’re a director, screenwriter, editor, or composer, or any type of content creator – this is for you!

•  Explore the secrets of building suspense on the screen.
•  Learn tools for keeping your audience riveted and engaged.
•  Create a binge-worthy crime drama or thriller!

Whether you’re current project is a thriller or a romantic comedy, the Los Angeles Suspense Masterclass is a must for any serious media professional wanting to craft a more riveting connection with their viewers.  Taught by leading experts of suspense and crime writing, you’ll spend a day exploring ways to make your film more captivating, spine tingling, and suspenseful.

First, forensic specialist Jennifer Dornbush will walk you through the foundational principles of crafting a crime drama/thriller and get that police-speak right.  Then, “Hitchcock Whisperer” Jeffrey Michael Bays will explore the steps to planting suspense into your film, and the visual language of putting it on screen.  HBO/Showtime writer William C. Martell will then bring you into the world of thriller writing, including how to use diversion, anticipation, and plot twists to make your script unpredictable.

This masterclass is perfect for filmmakers and screenwriters who want to refine their skills in suspense, thriller, and crime writing.

PREMIUM and PRO InfoList Members get 30% OFF!!  That’s just $87.50 (normally $125!) for an evening with top industry professionals!   Students can attend for only $49.70 (must show valid student ID at door to validate discount)!

I. CREATE A BINGE-WORTHY CRIME DRAMA!

What elements make a top box office thriller? How do you craft a crowd-pleasing TV crime drama?  From to ‘NCIS’ to ‘Stranger Things,’ there truly is a crime story out there for everyone.  Crime writer and forensic specialist, Jennifer Dornbush, will walk you through the foundational principles of crafting a crime drama/thriller that will help you ramp up the intrigue, suspense, and thrill of your next project.

–  Eleven crime/thriller story types & which one’s best for you

–  Three things you need to create a captivating crime story

–  Three forms of love to raise the stakes

In today’s busy world, preventing audience boredom is more important than ever. “Hitchcock Whisperer” Jeffrey Michael Bays brings the secrets of suspense out of the shadows, giving screenwriters and directors the tools to make their films more captivating, spine tingling, and suspenseful.  Filmmakers around the world have been loving this new look at Hitchcock’s works in order to develop their suspense skills with the camera.  You don’t need the cliché knives and corpses to do it, either!

–  What is suspense really?

–  Differentiating between suspense and tension

–  The art of camera orchestration

–  The symbiotic relationship between comedy and tension

III. THE ESSENTIALS OF A THRILLER

The essentials of a thriller story, using examples from MINORITY REPORT, NORTH BY NORTHWEST, BOURNE IDENTITY, BREAKDOWN, THE LADY VANISHES, THE GAME and THREE DAYS OF THE CONDOR as primary examples – what do all of those films have in common?  Secrets Desires, Basic Instincts, Moral Dilemmas, Isolation, Paranoia, Small Sins lead to Bigger Sins, Death & Rebirth of Protagonist, Doppelgangers, Mistaken Identities Spying, Villains, Deadly Paperclips and more.

–  How to use diversion & anticipation to make your script unpredictable, and create great heroes and villains.

–  Plus:  a look at writing Contained Thrillers like LIFEBOAT and ROPE.

Our panel discussion will be comprised of directors/writers/editors who notably have a gift for creating suspense on the screen.
Guest Speaker: JUAN SEBASTIAN BARON, Cinematographer, Searching (2018).

JENNIFER DORNBUSH is a screenwriter, author, and forensic science specialist based in Los Angeles.  As a forensic consultant, she is frequently asked to consult with TV writers on shows such as Beauty & The Beast, Bull, Deception, and Hawaii Five-O.  She has been teaching and script consulting since 1997 and regularly leads seminars and workshops on screenwriting basics, writing for Hollywood, crime fiction, forensics, death investigation, and the creative life.  Her book ‘Forensic Speak: How To Write Realistic Crime Dramas’ is hailed as a north star to creating authentic crime dramas and used by law enforcement and writing professionals.

JEFFREY MICHAEL BAYS, also known as the “Hitchcock Whisperer,” is a filmmaker, author, film scholar, and producer of the Hitch20 docu-series exploring Alfred Hitchcock’s twenty works of television.  He wrote two filmmaking books: ‘Suspense With a Camera’ and ‘Between the Scenes,’ and is a frequent contributor to MovieMaker Magazine, LA Screenwriter, No Film School, and Peter D. Marshall’s Director’s Chair.  He has a Master of Arts in Cinema from La Trobe University, Australia, and is currently an Adjunct Instructor at Lights Film School.  Before getting into film, he wrote and produced the feature length Not From Space heard on XM Satellite Radio (now SiriusXM).

WILLIAM C. MARTELL has written 19 films that were carelessly slapped onto celluloid: three for HBO, two for Showtime, two for USA Net, and a whole bunch of Cinemax Originals (which is what happens when an HBO movie goes really, really wrong).  He has been on film festival juries with Mike Figgis, Saffron Burrows, Lennie James, and Edgar Wright, and yes, even Julian Assange. The late Roger Ebert discussed his work with Gene Siskel on his 1997 If We Picked The Winners Oscar show.  His USA Net flick Hard Evidence out-rented the Julia Roberts film Something To Talk About – both were released on video the same day.  In 2009 he had two films released on DVD making the top 10 rentals.

Hope to see you there! 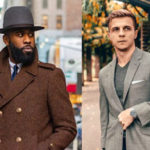