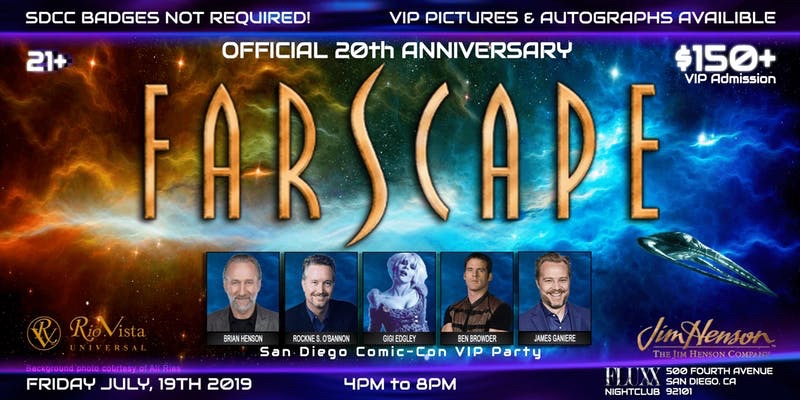 Party with the cast and creators – NO SDCC BADGE REQUIRED!

As always, there’s a great discount for INFOLIST.com – details are below!

Good luck, have a great day, and don’t forget to dream big!  See you at San Diego Comic-Con!

PARTY WITH THE CAST & CREATORS!

This exclusive VIP party will feature

your favorite Farscape celebrities, including:

GIGI EDGLEY and the FLUX CAPACITORS

PREMIUM and PRO InfoList Members get $50 OFF!!  That’s just $150 (normally $200!) for an an incredible evening with the creators and stars from Farscape!

You’re invited to a frelling awesome FARSCAPE: The Official 20th Anniversary VIP Party with your favorite crewmembers from Moya, set in a location that is truly out of this world – a cross section of the cosmic multiverse of science fiction, fantasy, and adventure!  Whether you travel by starburst or wormhole, you will not want to miss this VIP PARTY OF THE GALAXY, presented by Rio Vista Universal at San Diego Comic-Con.  It’s a full immersion party built for-the-fans, by-the-fans! (21+)

•  Entry to the VIP Party

•  Photo and Autograph with Brian Henson and Rockne S. O’Bannon (during the designated time at staff’s discretion)

•  Hang out and party with these awesome rockstars of Sci-Fi and other industry professionals.

This is a TIMED and PRE-PURCHASE ONLY event.

Geek of the Week

GET YOUR TICKETS NOW:

LIMITED TICKETS AVAILABLE!  To prevent being stuck in Tormented Space, act fast and grab yours NOW!

**All Photos or Signings are separate pre-purchase(s) and must be redeemed during the event. No soliciting talent outside of scheduled autograph and photo schedule or without a pre-purchased voucher.

***Photography and Filming will be present, and all attendees hereby consent for value received and without further consideration or compensation.