Here’s a great opportunity for content creators of all types to attend the amazing AT&T SHAPE event at Warner Bros Studios.

INFOLIST.com has teamed up with AT&T to bring you these tickets for FREE – but they’re normally $100, and will sell out soon, so DON’T WAIT!

They will have many top guests there, including director Cathy Yan of DC Comics upcoming blockbuster movie Birds of Prey, as well as Emmy-nominated actresses Elizabeth Banks (The Hunger Games, The Lego Movie) and Mayim Bialik (Big Bang Theory), Academy Award-nominated Geena Davis (Thelma & Louse, A League of Their Own), as well as top execs and creatives from top companies such as NextVR, Magic Leap, AWS, AT&T, NBA, and many more!

PLUS – INTERACTIVE EXHIBITS including GAME OF THRONES:  THE DEAD MUST DIE – as well as HARRY POTTER: WIZARDS UNITE & THE FUTURE OF AUGMENTED REALITY IN GAMING, and much more!

Details are below – as always, feel free to forward if you know anyone who might be interested, and be sure to use your special code (below) so you can attend for FREE!

exploring the future of entertainment and 5G

for content creators, filmmakers, writers, actors, influencers, and creative types of all sorts!

Use special code INFOLIST when you register, and attend for FREE! (enter code on final payment/checkout page)

Tickets are regularly priced at $100 and will SELL OUT, so DON’T WAIT!

(Director of the upcoming DC Comics movie Birds of Prey)

She will share her story of how she is now creating content for film and television, and supporting WhoHaha, a digital platform for female comedians.

(Thelma & Louise, A League of Their Own, Beetlejuice, The Fly)

will appear on the SHAPE stage to talk about The Scully Effect and how the role of media can help create positive social change.

A MASTER CLASS WITH

Sherri Shepherd will sit down to talk with Niecy Nash, about what she’s learned throughout her career and give insights on her road to success.

(Creator of RIOT, Storyteller from the Future)

She’ll share her insights into her emotionally responsive film RIOT at the intersection of AI & bias, gaming, art, neuroscience, behavioral psychology, and consciousness.

GAME OF THRONES:  THE DEAD MUST DIE

The world depicted in HBO’s mega-hit show, Game of Thrones will be rendered at SHAPE in a new immersive encounter on the Magic Leap One.  Unleash the wight.  Grab a dragonglass dagger.  Be inspired by the future of entertainment!

& THE FUTURE OF AUGMENTED REALITY IN GAMING

Brush up on your spells and get your wands at the ready!  Join WB Games’ Jonathan Knight and Mary Casey, and Niantic’s Archit Bhargava and Alex Moffit to learn about the creation of Harry Potter: Wizards Unite.  This new, immersive AR gaming experience invites players to view the real world through a Wizarding World lens, via your smartphone.

Danny Keens from NextVR will be appearing with top headlining, indie electronic artist shallou to talk about how artists are embracing technologies like virtual and augmented reality as a way to get fans more engaged and deeper into the experience.

Founder and CEO of Magic Leap, Rony Abovitz, will appear on the SHAPE stage to share his vision for a future in which the Magicverse creates a large scale canvas for creatives, with Magic Leap merging the digital and the physical worlds to create a new reality with 5G.

Ghetto Film School CEO Stosh Mintek and VP of DC Films Chantal Nong will join GFS alumna Luna Garcia and Alexi Gonzalez to discuss insights about their world class training, explain how to navigate writing and directing an international thesis film as a teenager, and outline the necessary steps and support needed as artists in the early stages of their careers.

TECHNOLOGY & THE FUTURE OF SPORTS

Join AT&T Communications CEO John Donovan and NBA Commissioner Adam Silver as they share their insight and explore trends and innovation in sports, media and technology.

NASA and the Emmy®-Nominated Space Explorers
Join the team behind the first cinematic VR cameras in space.  Felix Lajeunesse (Co-Founder, Felix & Paul Studios) and Dylan Mathis (Comms Manager, NASA) will talk about the team’s journey to create Space Explorers, and the next phase of the project, which has cameras up in space aboard the International Space Station.

…with many more to be announced!

Sample games, movies, and other content over 5G to see how this next generation of network is enabling new experiences.  See how VR, MR, and AI can combine to create engaging and highly interactive entertainment.

ROADTRIP NATION GETS YOU FUELED UP

Fresh off the heels of traveling the country, career-focused filmmakers Roadtrip Nation are sharing their insights with SHAPE through an exciting interactive experience.  Want to check it out?  Don’t worry, their spot on the lot will be hard to miss – just look for their giant RV!

The AWS DeepRacer will be at SHAPE to give you a fun, hands-on way of discovering reinforcement learning, an advanced machine learning technique.  You can get started with a virtual car in the cloud-based 3D racing simulator, and then deploy your trained model onto our track!  Challenge your friends. Experience the impact of machine learning.  The race is on!

Explore sets used to create productions such as

PLUS – check out the DC Comics Exhibit, the original Batman Museum Batmobile Collection

View the finalists’ films, vote for your favorite, and award the winners who will take home a share of $60,000 in Prizes!

MEET AND LEARN FROM OUR MANY SPEAKERS, INCLUDING:

…and many more to be announced soon!

BRINGING GAME OF THRONES INTO OUR WORLD: The Innovation Behind Marketing the Epic Final Season
AI VOYAGE:  Can Conscious Storytelling Save Us?

INFOLIST.com members can use special code INFOLIST when you register, and attend for FREE!  Tickets are regularly priced at $100 and will SELL OUT, so DON’T WAIT!

Use special code INFOLIST (enter code on final payment/checkout page) when you register and attend for FREE – Register NOW at:

Note:  Do NOT enter the INFOLIST code in the “Staff/Sponsor/Media” code box – wait until the final checkout window for the “Apply Promo Code” box!

Find out who will be at the event with our networking tool.   With the help of Brella software, you can easily see who is attending, plan your day, and start matching with other creators, developers, and influencers attending SHAPE.  Schedule 1:1 meetings at the event and jump-start your collaboration!

Sign up on our Brella Networking Platform so you can connect with fellow attendees:

Free Class for Actors: Book TV/Film on Your Own 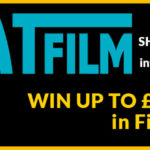 Latin(X) 5G Enthusiasts Wanted (Who Either Use or Want 5G) – Casting Amazing Opportunity for Verizon Wireless!